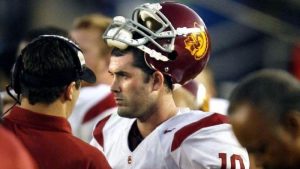 Where are they now series… (Register Below to Attend)

The Trojan Coaches Club invites you to grab your favorite snack and adult beverage and join your fellow Trojan Faithful for an evening of spirited discussion! ( A little bRUIN trash talk might make it’s way in there too!)

He red-shirted behind Matt Leinart before his first game as a starter in his junior year, winning 2 Rose Bowl victories at USC. He was drafted by the Minnesota Vikings in the fifth round of the 2008 NFL Draft. Booty also played for the Tennessee Titans and Houston Texans.